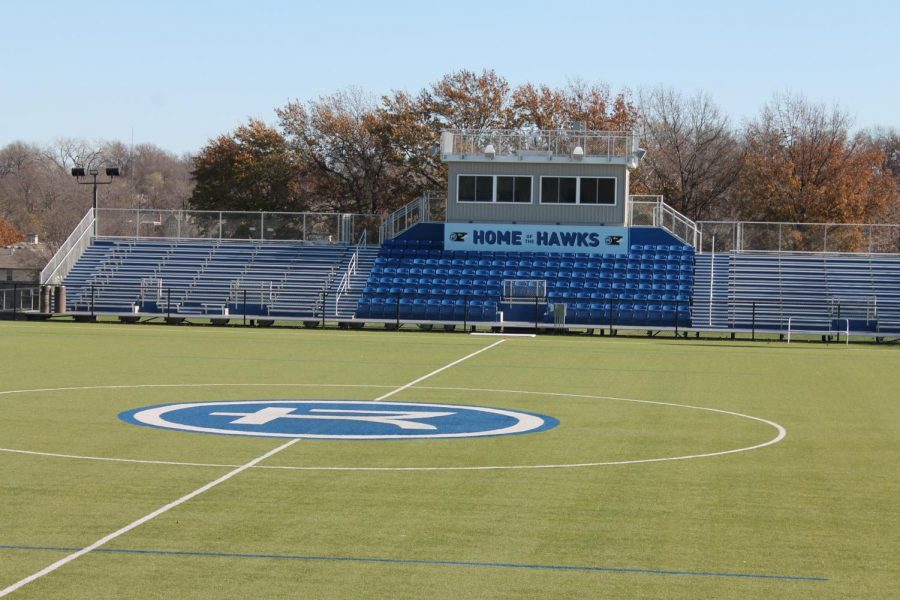 Much to the excitement of Rockhurst student athletes, the swoosh is coming to the Rock.

On February 7, Rockhurst University announced a new partnership with BSN Sports and Nike, in which BSN Sports would become the “official apparel and equipment provider to the Rockhurst Hawks’ athletic programs while outfitting the university’s athletes, coaches, and community members in premier Nike product selection.”

Rockhurst Athletic Director Kristy Bayer told the Sentinel the new deal with Nike and BSN Sports has many benefits for the institution, adding that it was a necessary move to elevate Rockhurst athletics.

“When I first got here this summer, and I was reviewing purchases and seeing what people were buying, everyone was kind of buying different brands and there wasn’t a unified look, as well as we weren’t pulling together to come up with the best deal financially,” Bayer said.

Bayer said that first and foremost, Rockhurst athletics needed to be more fiscally responsible, and this deal allowed them to do so. Purchasing from a single supplier will lower costs and increase our purchasing power, as well as achieve the unified appearance that Bayer desired for Rockhurst athletics.

Bayer said that Nike was chosen after a lengthy decision-making process that included multiple offers. However, “Nike had the best incentives.”

Outside of the deal itself, Bayer also felt that Nike was the best partner for Rockhurst from a values and mission standpoint. “I felt the mission of Nike aligned with what Rockhurst is about from not only social justice but from a gender equity standpoint and promoting all athletes as well.”

The specifics of the deal, which were not stated in the original announcement made in February but revealed to The Sentinel, involve a 5-year contract that will be phased in over the next 3 years. Not every team will be getting new uniforms immediately, but Bayer expressed that she is encouraging coaches to “at least get one set the first year.” She also expressed the priority of remaining fiscally responsible, especially for teams who received new uniforms in the 2021-22 academic year.

The agreement is considered a “gameday deal” in which Rockhurst athletes and coaches will be expected to wear Nike on gamedays. In addition, all apparel provided from the Rockhurst Athletic Department must be Nike; however, if something is not provided, that item does not have to be Nike. For example, if shoes or cleats are not provided for a team, the athlete does not have to purchase Nike shoes.

When asked if the deal will allow teams to provide more equipment and apparel to student athletes, Bayer said “I’m hoping with more discounts and by working with one dealer then we would be able provide that.”

Rockhurst student athletes have expressed their excitement for the deal and are excited to see the changes on campus beginning next year.

Rockhurst baseball player Beckett Rasmussen mentioned that he is excited to see Rockhurst sign an apparel deal that is similar to many of the deals he sees at other Division II schools. “As an athlete I appreciate that we’re taking strides towards bettering our programs. Nike is known for its quality, especially for athletic wear, so this deal excites me. I hope that the university will continue to take steps forward in the enhancement of our facilities and apparel,” he said.

“The goal is to make people hear the name Rockhurst and think not only elite academically, but elite athletically as well,” she said.