Are You Ready to Rockstock? 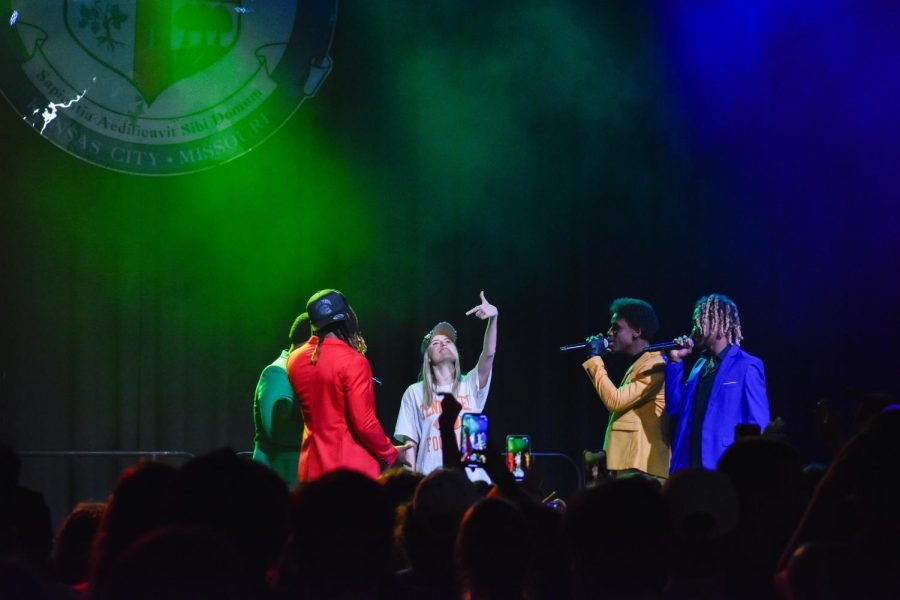 Rockhurst University’s annual end of the year event is soon approaching, and students are feeling all sorts of emotions. Rockstock is a weeklong event consisting of all sorts of heart-pumping events for all to enjoy leading up to one big night. With finals week right around the corner Rockstock could be the break that everyone needs right about now.

This year’s itinerary will include Instagram giveaways, farewell videos to Father Curran, cookie dough and pie in different community member’s faces, scavenger hunts, a farmer’s market and the culmination of the event—a concert. In late April, the Rockhurst Student Advisory Board revealed to the community news that the Rockstock day was set. However, they revealed the artist performing with a twist.

Over the course of a week, one of the five artists that were listed on a Spotify playlist were removed until the selected artist was left standing. On April 6, with anticipation at its highest, students discovered that the opening music group is Careless Vibez and the main act is Social House.

Who are they you may ask? Here is everything you need to know before the concert on Friday night. Prior to the concert, students will be able to enjoy a carnival full of food and games outside of the Thomas Moore Dining Room (The Caf) at 6:30 p.m. Around 8:00 p.m., Careless Vibez will then take the stage on Lower Bourke followed by Social House at 9:00 p.m.

Careless Vibez is a group made up of two sets of brothers named Deb Angelic, Prince Jeyree, Prez Nick and Free Baby who preform rhythm and blues and pop music. They have been singing for over ten years and have a following of over three thousand subscribers on YouTube. They also have a large following on Tik Tok with over 233 thousand followers, where they do singing challenges and music covers.

Social House is made up of Mikey and Scootie, and as of 2020, they have released five singles and one EP. When speaking about their music, Mikey stated, “There could be a jazz vibe to the melodies, guitar rhythms from country, hip-hop production, or really alternative chord progressions. It’s a fusion.”

The duo met in 2015 through a mutual friend who encouraged them to join together and create music. Although they have only been a group for seven years, they have worked with major artists such as Lil Yachty, Ariana Grande and 6VIB3Z. Social House has 107 thousand subscribers on YouTube and nearly six million monthly listeners on Spotify.

Judging by the reaction on the Instagram post under the @RockhurstSAB account, there is a great number of people that are excited and cannot wait to rock out Friday, April 29. Qu’ara Middleton mentioned, “I first heard Social House while driving and listening to an Ariana Grande playlist. She and Social House created the song “Boyfriend”, after hearing them I instantly fell in love with their music.” Other reactions have been somewhat the opposite which have come from not knowing who the artists are or even because their favorite artist wasn’t chosen. Another student went on to say, “If they had gotten Rebecca Black and she played her hit song ‘Friday’ I would show up at Rockstock.” With this being the first (or last) Rockstock for some, Rockstock will create long lasting memories for all.