What’s a theater program doing without a theater? 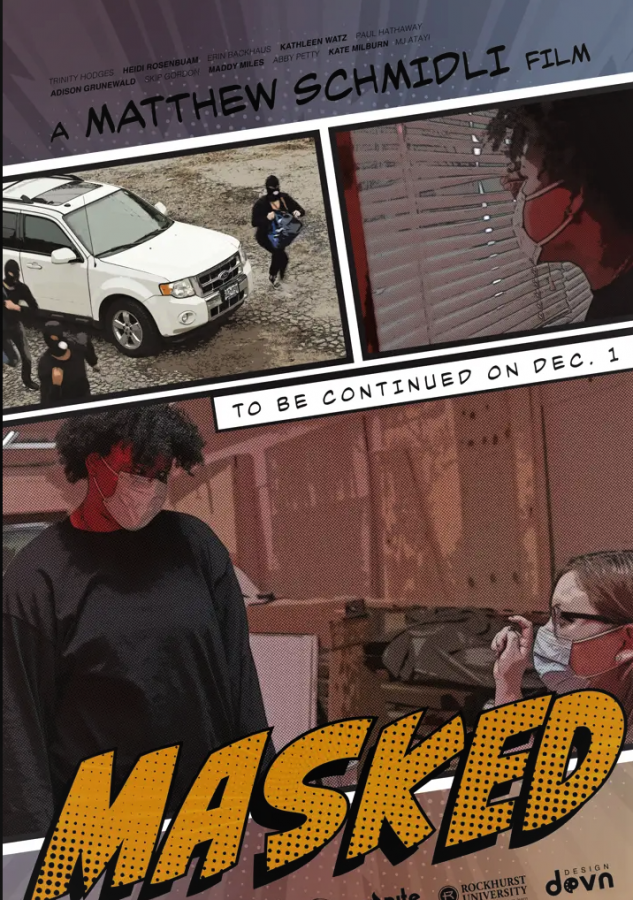 What’s a theater program doing without a theater?

Matthew Schmidli has some ideas.

Since the fall of 2017, the Rockhurst Theater Department has navigated its way through a whole host of hazards, from theater closure to pandemic protocols. That’s when Schmidli arrived on campus. Since then, he has sought to build a dynamic department that utilizes the best students have to offer.

“I took over this program four years ago. At the time, I did not know anything about the stability of the Mabee Theater. By the end of my first year, I was sitting in this meeting… the one theater person, learning that they were going to take down the theater.”

Mabee Theater closed its doors in the winter of 2020, following Rockhurst’s production of She Kills Monsters, in order to accommodate a newly renovated space for the Rockhurst nursing college.

Schmidli, a classically trained performer, was unsure of how to continue the program without a live space on campus.

He added, “I received a lot of support from other faculty—from communication professors, the artistic professors like Tim McDonald—to outside of those departments. The English department has been a big supporter. It was really important, for some stability.”

Schmidli was also encouraged by how students believed in the program, regardless of the venue for their theater, and their storytelling potential.

“The students are so wonderful and they were doing great things on stage…We try to tell stories that matter, which affect positive change in people’s lives,” he said.

The Mabee’s closure at the end of 2019 has forced the Rockhurst Theater Department to begin exploring new outlets for students to develop their passion, including filmmaking.

“We turned to film because I had started working on a television series, and I was doing a lot of commercials around town,” said Schmidli. “I have a lot of experience training on film as an actor as well. We could still tell those stories that matter…without a theater. So maybe we could do collegiate level film production while also live theater. It’s a different medium, it’s unique. We will do live theater again when we do get a [COVID-19] vaccine…it’s not a replacement for theater.”

The newly dubbed Rockhust Theater and Film Acting Department’s most recent production, Masked, puts a spin on what we’ve gotten used to wearing over the past eight months. Schmidli was optimistic about the film, and what was on slate for the future.  “Masked” is now available on Vimeo.

“We’re really glad that we were able to produce something, but it’s just really tough. Students really need to do something creatively and artistically…I hope that speaks volumes to the importance of our program.”

At the time Schmidli spoke with The Sentinel, Masked had a little over 200 views. As of December 9, that number has doubled. “It [Masked] will always be there. I’m gonna have an archive. People are going to be able to log onto our Vimeo page and be able to see our movies anytime they want.”

Rockhurst Theater and Film has a number of productions in the works, including a serial dubbed “Afeard”, which will premiere over the course of several weeks next spring.

“Ironically, because of the loss of the theater, we have a very unique program,” Schmidli said. “Now, students will have the opportunity to not only do live theater in some capacity but have the opportunity to work on films in three distinct ways: pre-production, film production, post production. Students can act in movies – these are movies they can show to their parents on the other side of the country…they can look back on and cherish for the rest of their lives.”

Schmidli emphasized the program had much more to offer than just movie-making.

“This is not a film production program; it’s a performance program. We focus on acting in films, directing in films, and there’s an opportunity to work technically. It’s a small program, it’s a minor so its not time consuming, and you can be a part of something special. I don’t know of any other program that’s doing what we’re doing. We’re working with really incredible people.”

While certainly in uncharted territory, Schmidli thanked faculty for helping and accommodating the new medium.

“The school has trusted me with this transition…they’ve been really supportive of me transitioning to this and the new Film Acting Minor. I am very thankful, very grateful for that. And while we’re sad about the Mabee theater, they’ve given us an outlet for film.”

Students have a lot to look forward to from the Rockhurst Theater and Film Acting Department.

“We’re gonna produce that in the spring, late spring. That’s the plan for the spring semester. We’re gonna release Afeard and film a 35-40 minute film, so we’ve got more fun stuff coming. While theater will survive and endure, film is flourishing. There’s a need for content, and we’re producing content here on campus, and that’s really cool.”