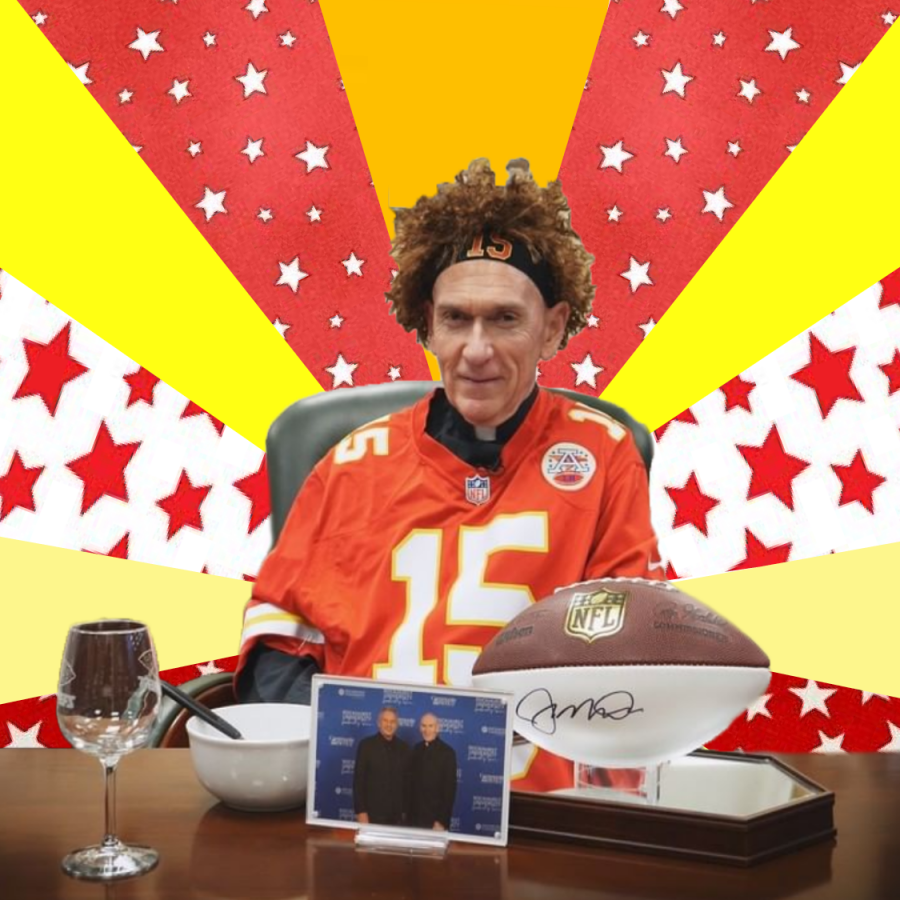 The Chiefs are in the Super Bowl.

You heard that right. The Kansas City Chiefs are in the Super Bowl and students here at Rockhurst University couldn’t be more excited.

As Sunday night approaches (game time is 5:30 p.m. central on Fox), Kansas City fans will be rooting on their team for what could be a once in a lifetime event, as it has been 50 years since their last Super Bowl appearance. With a franchise quarterback in hand in Patrick Mahomes, elite offensive weapons in Travis Kelce and Tyreek Hill, just to name a few, and a defense led by safety Tyrann Mathieu, Kansas City fans are counting on this not being the only Super Bowl they will see, but one can never be too cautious.

Students like senior Rosie Breheny voiced their excitement surrounding the game.  “I’m pumped to watch the game in comfort of my living room with all my best friends. We’re all making food so it should be fun!” Breheny said.

Heading into the big game, both Super Bowl teams have had a year to remember.

The Chiefs finished the year with a record of 12-4 and one of the most explosive offenses in the league, averaging just over 28 points per game. The record and stats don’t say it all though. At 4-0, the Chiefs started the season off until they hit adversity losing out of their next four games. In week 7 they lost star QB Mahomes with a knee injury versus the Denver Broncos, which held him out for four weeks. Since that slump, the Chiefs have sprinted towards the finish line with a healthy Mahomes and an improved defense, winning  nine  of their last 10 games — including their two playoff games.

On the other side of the coin, the San Francisco 49ers have had a season they haven’t seen for many years., After going 4-12 in the 2018-19 season, the 49ers turned the tides by finishing with an impressive 13-3 record at the NFC conference. The 49ers have had a steadier year than the Chiefs, with their  three losses coming periodically towardsthe latter half of their season. The 49ers have relied heavily on their defense all year. Their defense ranks first in pass yards allowed at 169.2 per game, second in total yards allowed at 281.8 per game and top ten in points allowed per game at 19.4, making them one of the best defenses the NFL has seen in a long time.

For Kansas City and Rockhurst, specifically the excitement around the Chiefs making the Super Bowl hasn’t been like this since the Royals were in the World Series.

“It’s great to see, there’s an excitement around the whole city and I think it really helps bring us all together,” said Curtis Lewis II, a Rockhurst junior from the Kansas City area.

Rich Bhyre, freshman, isn’t from Kansas City. In fact, he’s a Wisconsin native and fan of the Green Bay Packers, who lost to the 49ers and with it, a chance to meet the Chiefs in the Super Bowl.

When asked about what it’s like to be living in a city where their team is going to the super bowl, Bhyre said, “It’s sad to see the Packers not in it, but having been in a city where a Super Bowl was won, I can say I will definitely be rooting for the Chiefs on Sunday because it is an experience like no other to be in a city with a championship team.”

Come Sunday night, most if not all of Kansas City will be doing their best to help cheer on the Chiefs and see a victory in a game that many have never been able to witness.